(Author Note: If you would like to purchase a copy of Lemonade Stand, selling information can be found at the bottom of this post!)

A wise man once said, “A dream doesn’t become reality through magic; it takes sweat, determination, and hard work.”

And I am proud to announce that after many months of hard work, sleepless nights, a lot of tears and frustrations, I can officially say for the first time, “I am a published author”!!

Back in January, I was on vacation in Dominican Republic, sitting in the resort lobby sipping on another Mai Tai. That afternoon I spent the day on Isla Saona (where Pirates of the Caribbean was filmed), and my boyfriend-turned-fiance proposed to me on the beach. My anxiety was already peaked because I was overwhelmed with so much love and so excited about engagement. That night after supper, we went to the lobby to enjoy some live entertainment (and free Wi-Fi!), when an email notification popped up on my phone.

Someone had contacted me through my blog (nothing out of the ordinary). His name was Joshua Rivedal and he was a mental health author. In the email, he said that he admired my work from The Mighty and wanted me to write a piece for his upcoming book. I couldn’t believe what I was reading! Someone liked my work? Someone admired my dedication to mental health efforts enough that they wanted to feature me in print? If I had any doubts about if I was making a difference beforehand, they all suddenly flew out the window with that email.

(It’s no surprise that the rush from getting engaged and being asked to be published in a book, all in one day, gave me a panic attack!)

I could spend forever talking about the long, and hard, and frustrating, and overwhelming process it is to gett a rough draft into an official book, but I won’t. Rather, I’ll simply say this: I worked long and hard over these last few months, but the end result is everything (and more) I hoped it would be.

Being a writer isn’t easy. It’s a hard job, and with thousands of people trying to be the next Stephen King or Danielle Steele, or whoever, it’s a very competitive market. I was lucky enough that someone who admired my work sent me that mind-blowing email, but everything else was on me. If I was going to prove myself in the writing world, this was my chance…and hopefully this will pave the way for my own flourishing writing career to come. 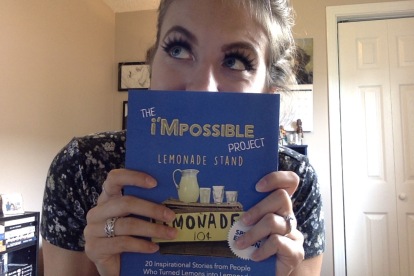 The book may not solely be my own, but it’s an accomplishment beyond words that I am proud of, and I don’t mean that in a braggy way. I’ve wanted to be published in a book since I was thirteen years-old, and the amount of excitement I am feeling now is beyond words. It took a long time for me to get here, but I am proud, and I would scream it from the rooftops if I could!

But I hold the honour of being published with 19 other authors in this wonderful anthology of courage and bravery, with others who were given lemons (or rather pelted with them!) and turned misfortunes and heartbreaks into lemonade, but it is an honour I’m glad to share with other strong people! Being a mental health advocate is hard and trying job, trying to make a difference when you’re a small town girl is even harder. But thankfully, all 20 of us are lucky enough that someone saw the brilliance in our shine. Our main man found us and gave us a chance to put us on the map. Forever I will be grateful for Josh and all his hard work. He made my dreams possible and that is a debt I can never repay.

But when mental health advocates join together…Well, I guess we really can help make a difference.

So go order Lemonade Stand now…Like seriously, go order it! You won’t be disappointed. Help support some up-and-coming authors, help share mental health awareness, and laugh or cry (or both!) as you read these wonderful tales of courage and bravery.

And who knows, maybe this little book will help you take your own lemons and make delicious lemonade (or at least give you the ingredients for a delicious martini!

Learn more about Lemonade Stand and The i’Mpossible Project by clicking here! 🙂

B’ys, is anyone else rage writing lately, or is it just me?🤷🏻‍♀️
The “Mid-way Manuscript Blues” has set in! Send help (or caffeine!)☕️
Why I never get any writing done on time…🤔🐶
Happy Pride Month to my fellow LGBTQ2S+ allies, companions, community, partners, and supporters!! Let’s celebrate love!🏳️‍🌈🏳️‍⚧️
Happy Mother’s Day to my wonderful mother, who’s bravery and kindness constantly inspires me in everything I do. Thank you for being my mother, and a (biased) critic for my writing!💕💐
What people think I look like when I’m writing ➡️ What I actually look like when I’m writing.