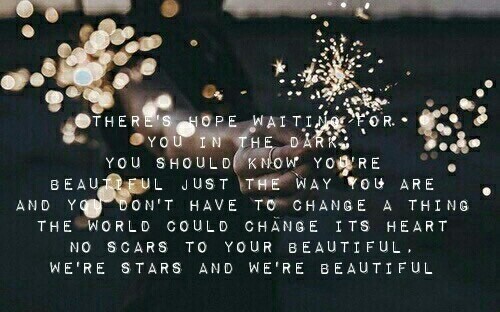 The interesting thing about being a writer is how many people highly underestimate us.

And in their defence, I don’t blame them.

Being a writer is a difficult profession. Whether you are a published author, or a blogger, or a journal writer, or a reporter. Writers are greatly underappreciated.

And no one understands this better than a writer.

Sleepless nights, staring at our computer screens till 3am, red-rimmed eyes boring at a mostly blank page, re-reading the same lines over and over, pulling our hair as we rack our brains for that perfect word, that one true sentence that brings our ideas to life. Putting in countless hours and stressing ourselves out, even when we know our fan base is low in numbers. We don’t write for the fame, we write for our loyal supporters. And for our sanity – for that unrelinquished desire that burns in our souls, scratching at our brains, burning every fibre of our being until we’re on the verge of insanity. We need to writers. Without writing we feel simply…stuck.

For me, while I do suffer from social anxiety, I’m also just a socially awkward person. Unless I know you really well, I’m not a great conversation starter. I laugh at inappropriate times, I struggle with answering simple questions. Basically, I’m just an awkward lump of flesh and bones with a giddy smile (and a warm heart!).

But despite my social awkwardness, I am a very perspective human. Even though I’m quiet and shy, if you see me sitting in the corner by myself, it doesn’t mean I’m not paying attention. Personally, I find it interesting to sit and watch how people interact. It’s a skill that is highly needed, especially when writing. If you can’t depict emotions, determining what the arch of an eyebrow or a tug at someone’s lips means, you can’t truly express a character’s emotions.

So while these skills are necessary for fictions writing, they are also useful for my blogging skills.

Flashback a few weeks ago. I was at the salon, sitting in a worn leather chair, scrolling through Pinterest for a new hair shave design when the lady next to me grumbled to her hairdresser.

My writer ears instantly tuned in.

The song in question?

“Scars to Your Beautiful” by Alessia Cara.

Now personally, I love this song, but I was interested to hear why she deemed the song so hateful.

Obviously the hairdresser repiled, “Why?”

“Because my seven-year old asked about the lyrics and I was forced to have a conversation about mental issues and how people cut themselves. Unbelievable! They shouldn’t be playing songs like that on the radio that can influence children!”

The silence was deafening. And I was convinced that the lady could hear my teeth gritting.

Despite my mental health advocacy brain wanting to go into a full-blown “discussion” mode (Well, let’s be honest. I wanted to tear her a new one.), I was also unhappy with the language she used.

A few words stood out to me: Issues. Forced. Influence.

First, “issues” is a sensitive word, even for people living with mental illness. We sometimes use the terms interchangeable. Mental health issues. Mental illness. Now, the word “issues” doesn’t automatically offend me, but it was the disdain in her voice when she muttered “metal issues” that first got my blood boiling.

Hell no! It’s mental health issues or mental illnesses. And when you say these words, they shouldn’t be said in a negative or hard tone.

Come on, it was one of the most basic life lessons I was taught as a child: If you don’t have something nice to say, don’t saying nothing at all.

Ok, I am not a parent. I’m a fur momma, but I am not a parent. Yet, isn’t part of raising a child is having uncomfortable conversations? To talk about the hard stuff to teach them good morals? Despite your own views, aren’t these moments suppose to be teaching opportunities?

And maybe I’m just full of you-know-what and I don’t have a clue what I am talking about, but despite you feeling uncomfortable (the word she should have used!), wasn’t that a good moment for you to tell your child that mental health is important?

Believe me, I know better than anyone that mental health is a tricky and difficult topic to discuss. I know about the risks of offending others and tiptoeing around sensitive topics like self harm and suicide. No, they are not easy things for adults to comprehend, let along a seven-year old child, but it’s something we all need to be aware of.

And if that isn’t convincing enough. Let’s throw in some stats!

According to the CMHA, the second leading cause of death for Canadians between the ages of 10 and 24 is suicide.

And if those numbers aren’t staggering enough for you, in Australia, 41 000 young people between ages 12 and 17 have attempted suicide in 2015 alone.

So forgive me, but “forced” seems like the wrong term to use. “Necessary” should be more appropriate. The rates of suicide in pre-teens are risings considerably, and alarmingly. That is something that shouldn’t be ignored.

She thought the song would “influence” her daughter.

Influence her to do what? Starve herself? Self harm? Place unrealistic expectations on herself? Let society tell her she is only beautiful if she is a size zero and has flawless skin?

This is the entirely opposite of what the song is expressing!

If I had the song lyrics printed on paper, I would have thrown them in her face.

After several minutes of mind-blowing, internal anger, I was ready to blow a gasket. My blood was pumping, my heart was racing, I had so many things I wanted to say to her, and a few choice curse words to boot.

It takes a lot to make me physically angry, but I was so miffed I thought I cracked the braces off my molders.

PEOPLE LIKE HER ARE THE REASON A NEGATIVE STIGMA AROUND MENTAL HEALTH ISSUES EXISTS IN THE FIRST PLACE!

The writer flames were burning deep.

Luckily, the hairdresser beat me to the punch.

“Is that really a bad thing? Talking about mental health?”

My face must have been smug because I caught the lady glaring at me in the mirror.

She stammered for several minutes. “Well, it’s just ridiculous…She’s only a kid…She doesn’t need to know about this stuff…She’s a good kid…My kid isn’t like that! Kids don’t know about mental issues.”

Lady, refer to the CMHA stats above!

How the hair dresser remained composed was beyond me, but she just continued to trim her hair and she shrugged her shoulders nonchalantly, “Well I really like this song! It’s beautiful.”

She deserved a fucking standing ovation.

Despite the anger that was still coursing through my veins, the hair dresser was really the saving grace in that moment. A little faith in humanity was restored. Another battle for mental health rights was won again. And I was unbelievably proud (and a bit giddy).

Despite the stigma, the perception is shifting. Slowly, but surely, people are starting to change their views.

And whether that hairdresser was suffering from a mental health issue herself, or knew a loved one who was, the point is, it doesn’t matter. You don’t have to live through it to support it.

The perception is changing.

And I couldn’t be more happy.

So whether you’re out there in world, feeling alone, or criticized, or underappreciated, know that there are humble warriors out there, fighting the battle with you, and for you. They’re winning small victories, but a world war isn’t one in a day. We have to take some losses along the way, but one day, hopefully, the perception will change.

Because it’s changing now. Believe me, I’ve seen it.

Whether you think I’m paying attention or not.

And if you do feel a little defeated or down, go to YouTube, turn on “Scars to Your Beautiful” and remember, “you a beautiful just the way you are.”