No, I’m not referring to Christmas (since Christmas has just passed us by)!

And I’m not referring to the release of Star Wars: The Force Awakens either! (Which I’ve seen twice now!)

2015 has come and gone, a new year has begun. The holiday seasons have come to a close and many schools have re-opened today. The festivities are all wrapped up, decorations are slowly coming down, New Years Eve has passed us by. 2016 came in quietly and quickly. It’s time to winded down and just relax, right?

Well, not when you’re an advocate for mental health!

If there is one day of the year I look forward to more than Christmas (or my birthday), it’s the month of January. Why? Because Bell hosts their annual Bell Let’s Talk Day! This year, Bell Let’s Talk Day will be on January 27, 2016 (Wednesday). Mark your calendars! 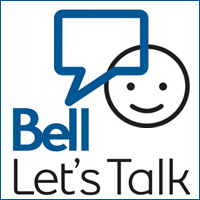 Last year was a huge success for the initiative, raising over six million dollars to be donated toward mental health initiates across the country. In addition, Bell extended the efforts for another five years, aiming for a 100 million dollar goal! Big news for the mental health community!

But it’s more than just being excited that conversations about mental health are being made around our great country. Bell Let’s Talk Day holds a special place in my heart for one huge personal reason.

Last year’s Bell Let’s Talk Day is the first time I took to social media to talk about my own struggles with mental illness. At this point in my life, only close friends and family members knew about my illness. Others suspected, but up to this point, I had just told people I was suffering from chronic migraines (which wasn’t exactly a lie either).

Was I nervous? Hell yes!

I’m fortunate enough that I am surrounded by mostly positive people in my life. However, putting myself on display to the public, admitting to my struggles and showing what I went through was no easy feat. Would I be able to handle the criticism that would follow my announcement? What if friends, or worse, family treated me differently? What if no one believed me? All of these questions and a million others flowed through my brain as I sat at my computer, trying up the Facebook post. I read it over, re-read it, triple read it. By the tenth time of reading it over, I wasn’t sure if I had the strength to hit that “POST” button. My hands were shaking, my anxiety had reached a whole new level. I felt like I was going to vomit and faint at the same time. Once I hit that button, there would be no taking it back.

Was I really ready to put myself on display?

To a degree, I felt like I had no other choice. That New Years I made a commitment to myself that I would work on making myself better. After struggling for over three years, I needed some relief. I was sick of lying to my family, I was sick of denying questions my friends asked. I wanted to be my true self, mental illness included. I felt that if I hid it any longer I would explode. I shouldn’t have to hide who I am because of an illness that is just as legitimate as diabetes or heart problems.

The likes and responses began flooding in immediately.

Of course, when that little red dot popped up on my computer screen, I felt the panic wash over me again. “This is a mistake!” “Why did you do this to yourself, Amanda?” “This is it! This is how it all ends!” (If you think that sounds dramatic, you should have been in my head!)

The positive responses and comments were so overwhelming. My heart began racing for a whole new reason. I was excited and overjoyed! I had friends commenting, telling me about their own struggles, loved ones said they were proud of me. But the major thing that resonated with me was the support of my friends telling me to keep fighting, to keep spreading awareness.

By the end of the night, I had over a hundred likes on Facebook. I was also excited to see fellow Facebook friends start to share their own stories. I seen posts, shares, Instagram photos of people showing their participation in texting and tweeting. When the rush had finally died down, I remember sitting on the couch with Zack and he wrapped his arm around me and said, “I’m so proud of you. You never cease to amaze me.”

It felt so good to have that weight lifted off my shoulders. For the longest time I carried my illness around like a burden, a shadow looming over me that would never go away. But once I took control of it, accepted it, made it a part of me, I knew that I had taken back a part of my life I thought I lost. And what made me feel even more inspired was that no one could use it against me. I always feared that my mental illness could become a threat to me, not physically, but for others to toy with, to hold against me. Now, no one could ever use my illness as an attempt to control me or hurt me. It felt empowering.

Bell Let’s Talk Day is what started my personal snowball effect to raise awareness about mental health. I started tweeting events, sharing stories, commenting on news coverages. I shared my own experiences. I’m writing novels about characters suffering from mental illnesses. I started this blog.

Because when it all comes down to it, it’s all about talking and conversation. Mental illnesses are slowly being accepted as the norm in our society. While we still have a very long way to go, and an uphill battle at that, I believe we are making some progress. But it’s not just something we can say we support and then move on. Bell Let’s Talk Day is just one day. While I appreciate everyone who takes part, it just doesn’t end there when the clock strikes twelve. We need to keep the conversation going. It’s a daily effort. It’s not like Christmas. You don’t just celebrate it then pack it all up for another year. Mental illnesses don’t just go away because you stop supporting it. It’s real.

So keep the conversation going. Like I always say, do the grunt work. Do the research, educate yourself. Talk to people living with mental illness, learn from their experiences first hand. Show your support, let friends and loved ones know that you are a good listener, you’re willing to try. Attend events, participate in community functions. This list is endless.

It’s not about finding a cure, it’s about ending the stigma.

It’s not about pity either.

One day I would like to be able to have a conversation where if I say, “Hi, I’m Amanda. I have PTSD,” the response can be something like, “Oh, wow. My friend has anxiety. I understand,” NOT “Oh, that’s too bad. I’m sorry.”

I don’t need anyone to be sorry for me. I just want to be understood and taken seriously.

So take the time this month to start the conversation about mental health. Share Bell’s “End the Stigma” ads, learn about events in your community, talk to a person living with mental illness. Be involved.

So for me, it’s the most wonderful time of the year because I get to spend a  full month shamelessly sharing my experiences with mental illness and blowing up my Facebook page and Twitter account with articles, videos, and news about mental health (which I do all year ’round anyway). But for the month of January, I get to be a little bit more relentless with my support.

So join in on the conversation.

And remember, fight the good fight.

I lost my favourite writing buddy last week.🐾
Or it could be that having a toddler and a four month-old means my permanent state of exhaustion means I forget things easily.😅
It was all LOVE tonight with @shaunmajumder at his Corner Brook show of his new tour, The Love Tour.❤️
My unofficial editor/bff/soul sister always gets me the best birthday gifts!🎁 Can’t wait to read about @violadavis’s journey!📚
Did I scream like a two year old when I got my pre-ordered copy of @backmansk’s “The Winners” today? I sure did. Am I ashamed? Absolutely not! So excited to finish one of the best trilogies I’ve ever read.📚
Ok, I’m trying really hard this time not to!🫢